Tax arrangement was originally agreed upon between the state and the Bahai movement in 1987.

{josquote}The main activities of the World Bahai Center are the development and maintenance of the communitys holy sites in Haifa and the Galilee, as well as increasing tourism and investment in them.{/josquote}

The Justice Ministry announced on Monday that it has renewed a deal with the Bahai World Center in Israel exempting it from indirect taxes for another five-year term.

The announcement comes ahead of the holiday of Naw-Ruz, the Bahai New Year that takes place on Wednesday. The tax arrangement was originally agreed upon between the state and the Bahai movement in 1987.

Representatives of the Bahai faith, headed by Albert Lincoln, the secretary-general of the center, welcomed the signing of the agreement, which he said benefits both Israel and the Bahai community.

Who Owns the Expanding Lakeshore at the Wilmette Temple?

An interesting development on the Lake Michigan shoreline adjacent to the Bahai Temple at Wilmette is presenting a challenge to the Wilmette Park District and the Bahais of the United States.

Over the past 40 years what used to be merely a thin sandy beachfront has grown to become about two acres of land. Thats large enough to fit two football fields or more than 87,000 square feet.

The issue hinges on whether the new land was created as a result of natural processes or whether it was man-made. If it is deemed to be natural, then the Bahais will continue to have ownership of it. If it is shown to be a result of artificial origin, then it will default to the state of Illinois.

WJE Wins Award of Excellence for the Baha'i House of Worship

The International Concrete Repair Institute (ICRI) has awarded WJE an Award of Excellence in the Longevity Category for its work on the Baha'i House of Worship in Wilmette, Illinois. The Baha'i House of Worship, which is listed on the National Register of Historic Places and is on the of nation's finest examples of architectural concrete, was designed by architect Louis Bourgeois with engineer John J. Earley, "the man who made concrete beautiful," and erected between 1930 and 1953. The project consisted of a comprehensive program to correct defective details of the initial construction and restore the temple's remarkable concrete to its original and brilliant condition. WJE served as the project engineer/designer. The Baha'i House of Worship was awarded ICRI's Repair Project of the Year Award in 1993 and the Award of Merit in 2010. 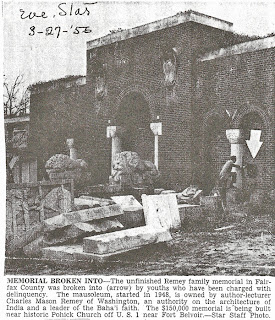 In the Tuesday afternoon edition of the Washington Evening Star newspaper on March 27th, 1956, the paper's crime beat reporters dutifully wrote that the Fairfax County Police Department, had arrested eleven juvenile males the previous weekend and then charged them with breaking and entering, vandalism, and destruction of private property.

What made this particular crime noteworthy not only was that the owner of the property in question was a prominent & renowned Washingtonian, whose lineage traced back from one of colonial Virginia's founding families, but also the boys claimed that they were inspired by a recent lecture on the ancient tombs and crypts of the pharaohs in Egypt delivered in their high school history class at Mount Vernon High School, which was located approximately three miles north of the crime scene on U. S. Route One, a large mausoleum that was positioned a couple hundred yards southwest of the nearby burial grounds of the historic Pohick Episcopal Church, in Lorton, Virginia.

Tales from the Crypt

{josquote}Whether his plans worked out or not, he succeeded in creating a magnificent structure. He made something which played a significant role in the lives of young people.{/josquote}

Edgar Allan Poe would have felt right at home in the underground chapels and burial vaults of the Remey Mausoleum, which used to be located about a quarter-mile from Pohick Church near Route 1.

The crypts with their marble pillars and vaulted ceilings, were erected by author-lecturer Charles Mason Remey in the late 1930s. After years of vandalism and break-ins by assorted thrill seekers, the elaborate mausoleum was demolished in stages from the late 1970s through the early '80s.

Remey constructed the mausoleum on Pohick Church property, because he claimed to be the great-grandson of George Mason, a founding member of the church (with George Washington). The burial crypts were to inter the Remy family, most of whom had come here from Iowa.

Within the structure, a huge marble sarcophagus, carved in Lisbon, Portugal, awaited Remey's body. The mausoleum contained the remains of 15 Remey relatives, including Remey's wife Gertrude, who died a year after their marriage.

A series of reliefs showed important incidents in American history in which Remey's relatives had participated, from the landing of the Mayflower to the sinking of the USS Yorktown, carved by Felix de Weldon, who sculpted the Iwo Jima memorial in Arlington.

Read more: Tales from the Crypt