On July 26, Professor Mehrangiz Kar posted an article in Persian on the Rooz Online site, which referenced remarks she made as a guest speaker at a symposium in Virginia, focusing on the historical and social context of Taaherehs unveiling at Badasht. Dr. Kars question, which she repeated in the article on Rooz online, (in Persian) was:

Suppose that Taahereh were to miraculously return to life, and came to the same meeting [in Badasht], and put her name forward for membership of the House of Justice, the highest decision-making body for Bahais. Given the ruling of the new religion, that women are excluded from the principle (sic) centre of authority in the Bahai Faith simply by virtue of their sex, could Taahereh, with all her courage, passion, wisdom and knowledge, enter the House of Justice?

The responses from some Bahais, at the symposium and following her article on Rooz Online, have been such that the National Spiritual Assembly of the United States has published a letter, in Persian and in English, which reproves the harsh criticism made against Professor Kar by some Bahais.

I have posted the entire letter in English on my Bahai Studies blog, under the title Lets talk, together with some reflections on what can be learned, and what could be done.

The Bahai Faith Compared to Race in American Counties

The Baha'i Faith is a relatively new world religion. Born on the streets of Persia in the mid 19th century, the religion quickly spread throughout the world as a result of organized teaching campaigns in the 20th century. In the United States, the Baha'i Faith is estimated to have about 175,000 adherents.

Yet, analysis of the spread of the Baha'i Faith in America has been tightly controlled by the national offices. In my project, I sought to perform my own analysis of key community areas in order to both demonstrate to the National Spiritual Assembly  the ranking Baha'i leadership in America  the usefulness of open data as well as allow for average Baha'is to compare accessible maps of their community to put their efforts in the scope of the larger Baha'i activities. The maps on this poster are a few of those I created for Baha'i communities across America. For my project, I specifically focused on race within each community as the global Bahai Community prides itself on being very racially diverse.

" a body of learned Bahais"

Obviously the House of Justice needs someone w/ an appropriate background to explain the Writings to them. This was in the context of letters that showed the Universal House of Justices understanding of Bahai teachings evolving over time. I will give more details below.

It is true that Abdul-Baha made statements linking the establishment of the unity of nations to the twentieth century. For example [in the 7 candles]: The fifth candle is the unity of nations  a unity which, in this century, will be securely established, causing all the peoples of the world to regard themselves as citizens of one common fatherland.

This assumes that this century is equivalent to 20th century, without any basis. It is incorrect, for reasons I have explained elsewhere.

"Bahais marry their sisters" - the prohibited degrees of affinity for marriage 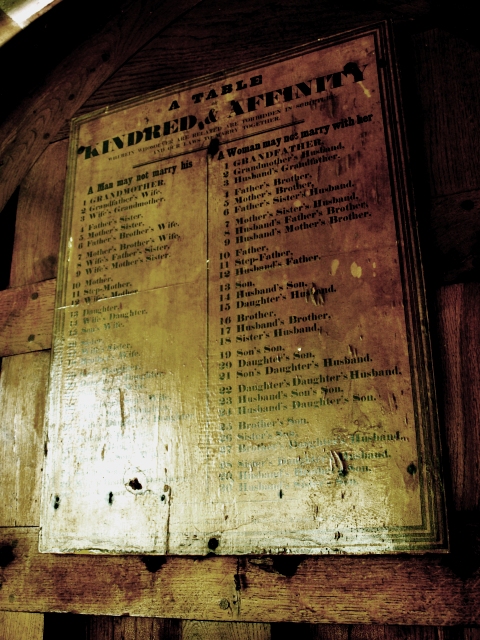 This posting will explore the principles and procedures that determine the prohibited degrees of marriage in Bahai law. How closely does someone have to be related to you, to be too close for you to marry? The term affinity is used to include blood relationships and marriage relationships.

Bahai readers will no doubt ask, why do we need a systematic explanation of this now? It is not as if there is a problem: we do not have a prevalence of first cousin marriages in Bahai communities, our assemblies are not overburdened by requests from fathers wanting to marry their daughters. Our lack of interest in the issue is indicated by the fact that the Bahaikipedia section on marriage laws does not mention the prohibited degrees of marriage. Apparently, we are quite satisfied to obey the civil laws and use our common sense.

However the lack of a systematic presentation in terms that are understandable for people from an Islamic background has given room for numerous Islamic scholars and anti-Bahai web sites to tell the people they can influence that Bahais marry their sisters.

Bounded Religious Communities' Management of the Challenge of New Media

Bahá'í Negotiation with the Internet

{josquote}If the blogger who makes negative claims happens to be a practising Baháí, he/she can be labelled as a covenant-breaker and shunned by the community.{/josquote}

The negotiation of new forms of media by religious groups is a dynamic and complex process that involves decision-making engaging the history, tradition and beliefs of the community. This negotiation process is especially complex for bounded religious communities, which establish rigid social and value-laden boundaries allowing them to create and maintain a unique and separate cultural system. Observing how members of bounded religious communities interact with the Internet enables us to consider how some groups resist the fluidity of networked relations and instead use technology to maintain closed social structures and solidify their unique identities. This is clearly seen in the case of the Baháí faith, especially in the patterns of use and limits American Baháís have developed to engage with the Internet. By using the Religious Social Shaping of Technology approach, developed by Campbell (2010), as a lens to explore the challenges and choices made by the Baháís, this process of technological negotiation is unpacked.