The Subject of Boys

We need to make it better now!

Society and the individual  a Bahai view

Recently I came across this Letter written on behalf of Shoghi Effendi:

“The Bahá’í conception of social life is essentially based on the subordination of the individual will to that of society. It neither suppresses the individual nor does it exalt him to the point of making him an anti-social creature, a menace to society. As in everything, it follows the ‘golden mean’. The only way that society can function is for the minority to follow the will of the majority.”

Letter on behalf of Shoghi Effendi, 21 November, 1935. Printed in 1973 in Directives from the Guardian.

This made me sit up because it is the individual, not the collective, that is “created in the image of God,” (See Genesis 1:27 or Some Answered Questions, pp. 195-197) and because the protection and priority given to minorities is characteristic of the form of democracy intended for a Bahai society. And that the spiritual priority of the individual, over all the structures that are created by and consist of various individuals, underlies many other Bahai teachings. For example: 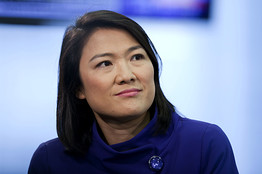 Zhang Xin, the billionaire Chief Executive of, insists she's not the woman she once was.

Religion has changed everything. At age 45, Ms. Zhang is reinventing herself as a moral and modest Baha'i convert who has transcended materialistic pursuits and now wants to focus on charity and education. "Baha'i has transformed me," she says.

It's hard to square this vision of Ms. Zhang with her public image. Millions in China know her rags-to-riches success story: a textile factory worker at age 14 in Hong Kong, a night school student who made it to Cambridge University in the U.K., an early career with Goldman Sachs and Travelers Group. Together with her husband, Pan Shiyi, she founded Soho China and took it public in 2007, raising more than $1.9 billion.

An illegal Tongan immigrant who faces deportation has been warned the hospital in her home country cannot meet her medical needs.

The woman - who does not want to be identified - is from Ha'apai, an island chain ravaged by Cyclone Ian in January.

New Zealand has already sent her husband back and she fears that if she goes too, she will die. "Don't send me back to Tonga because I can't afford a doctor there," she says.

"The Baha'is will disappoint you."

I could not, for the life of me, figure out why she was telling me this.She had been slowly and patiently teaching me the Faith for years and I had just declared less than an hour earlier. And now, here she was, telling me that the Baha'is would disappoint me. Was she trying to discourage me from staying within the Faith?

"No matter what happens", she went on, "always look to the Writings, not the people. The Writings will never disappoint you. Baha'is will disappoint, but Baha'u'llah never will."

A long time dedicated international pioneer for the Bahai Faith passed away peacefully last Friday afternoon, after battling with cancer for the last six years. Mrs Jane Caulfield Hyman of Vaitogi, first came to Samoa from California with her husband Bill in 1972. They spent the first two of years in Apia, teaching and proclaiming the Bahai Faith before moving to American Samoa in 1974.