Harrington 102 Latest Review: "Disgraceful - do not stay there!" 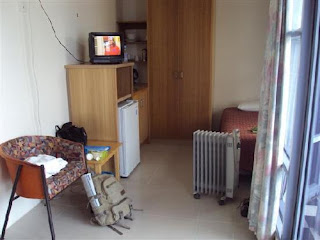 We have reported several times on the Harrington 102 owned by Soheil Mehrab-Khani. There is a new review on Trip Advisor dated 25-11-11 which is a doozie:

It was written by Rose from Frankston, Victoria and is reproduced in full below.

A compilation of Native Baha'i photographs and information from the 1930's to our current history. All are welcome to comment, add information, and send photos

This site is mostly about Baha'is from the United States, Canada, Hawaii, and Alaska, but also welcomes information on other Indigenous Baha'is around the world.

Pan Shiyi, the real-estate mogul who became an object of online ridicule earlier this month, on Wednesday showed an ability to laugh at himself  as well as an ability to turn a public-relations stumble around.

Mr. Pan, chairman of Soho China Ltd., said on his Sina Weibo microblog earlier this month that Apple Inc. could best commemorate the passing of co-founder Steve Jobs by making cheaper versions of its bestselling iPad and iPhone  under 1,000 yuan (about $157)  so that more people could afford them. This struck a chord  the wrong kind  with many members of the Chinese Internet, where developers such as Mr. Pan have been heavily criticized amid worries about unaffordable real-estate prices.

Retweeting the post, one commenter said, If Mr. Pan passes away, please offer houses below 1,000 yuan per square meter. More than one billion people will commemorate you.

Online wags ran with the joke. Some mocked up Panbi, or Pan currency, with his likeness and with a value of one Pan equaling 1,000 yuan per square meter.

{josquote}The back features a quote from the BahaI faith, which Mr. Pan prominently practices and preaches on Weibo from time to time.{/josquote}

But on Wednesday, Mr. Pan offered his own version of Panbi on his Weibo feed. His one-Pan bill looks suspiciously like Chinas 100-yuan note, except with Mr. Pan on the front instead of Mao Zedong. The back features a quote from the BahaI faith, which Mr. Pan prominently practices and preaches on Weibo from time to time. In his post, Mr. Pan says he hopes Chinas central bank, which oversees the yuan, wont mind the new currency.

Readers of this site will be aware of how very hard it has proved for many creditors,usually sole tradesmen, to get their money off Mr Khani.

Just tracking him down to serve him can be very difficult.

His own Solicitors Gunson Williams needed to sue him to get paid.
That sum included the cost of sending the letter shown earlier on this site threatening a Defamation action. (Presumably Gunson Williams now join Chris Boland Lawyers and Abetz Curtis as his ex-Solicitors)

The Tribunal decision in Ali Youssef v Khani reported that in trying to get money off Mr Youssef, Mr Khani:-

In substance the Complainants evidence was that he attended a meeting with the Respondent at the offices of Nextra Newsagency Northgate on 26 October 2004.He indicated that Mr David Bennett from the Mercury arrived at this meeting after it had been commenced.His evidence was that during the meeting the conversations became heated and that voices were raised.He maintained that the Respondent was speaking at him rather than talking to him.He stated that the Respondent flung himself on the ground and made inappropriate actions and comments.He went on to say that he paid the Respondent a cheque and that after this cheque was paid the Respondent made a number of inappropriate comments, including Fuck Allah, Fuck your prophet Mohammed, Fuck you, Fuck Moslems, You dont worry me, get your ugly face out of my shop, go look in a mirror and see how ugly your face is, You poor people came from Sierra because you are hungry and had nothing to eat.