The practicalities of monarchy

One nation, with Aunt Susan 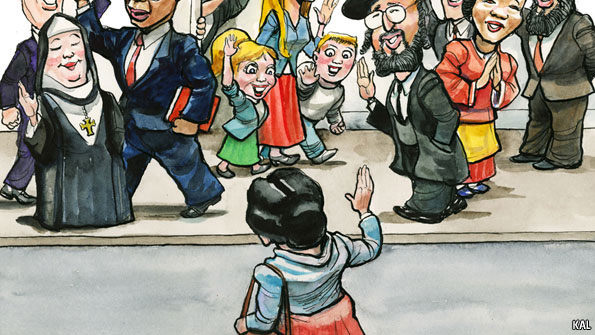 At a time when Americans are worried about their crippling political divisions, it is pleasing to report that two social scientists, Robert Putnam of Harvard University and David Campbell of the University of Notre Dame, have just written a book that examines a powerful source of American unity. Perhaps unexpectedly, the unifying force they focus on is religion.

Americas religiosity has been extensively documented and should surprise no one. It is, Sarah Palin said in her own new book this week, a prayerful country. More than eight out of ten Americans say they belong to a religion. More Americans than Iranians (four out of ten) say they attend a religious service nearly once a week or more. What is a surpriseor should be, when you think about it in the way Messrs Putnam and Campbell haveis that religion in America is not more divisive. They argue in American Grace (Simon & Schuster) that religion gives Americans a sort of civic glue, uniting rather than dividing.

The unifying impact of religion would not be so puzzling in a country where people were pious but where there was only one dominant religionCatholic Poland, say. Americans, by contrast, hold intense religious beliefs but belong to many different faiths and denominations. That should in theory produce an explosive combination. So why doesnt it?

The "We come in Peace" tour

With the controversy surrounding the Ground Zero mosque and increased Islamophobia, it is more important than ever to highlight cultural and religious tolerance in America. FUNATICAL: Taking Comedy to the Extreme's "We Come In Peace" interfaith comedy tour features multicultural comedians who poke fun of stereotypes, culture and current events, which they lampoon with humor and satire.

Bahau'llah condemned the Catholic practice of confessing ones sins to a priest:

When the sinner findeth himself wholly detached and freed from all save God, he should beg forgiveness and pardon from Him. Confession of sins and transgressions before human beings is not permissible, as it hath never been nor will ever be conducive to divine forgiveness. Moreover such confession before people results in ones humiliation and abasement, and Godexalted be His glorywisheth not the humiliation of His servants. Verily He is the Compassionate, the Merciful. (Tablets of Bahau'llah, page 24)

Of course, when I was a Bahai I believed this. You shouldnt confess your sins to a priest. Thats unnecessary and embarrassing.

{josquote}God gave us confession as a gift, so that we can have assurance that he forgives us.{/josquote}

When I made the decision to join the Catholic Church, I had to go to confession for the first time and say every wrong thing I had ever done up to that point. And you know what? I didnt feel embarrassed or humiliated. On the contrary, it felt good to get it off my chest, and know that the slate was wiped clean. I didnt feel like I was getting away with it anymore.

{josquote}...if you are going to criticize other religious movements for their perceived inaccuracies, then be prepared to meet the same kind of treatment from others.{/josquote}

One of the critical things I have heard some Bahais say about the Church of the Latter Day Saints and Jehovah's Witness, is that their religion is filled with failed prophecies, and if they came from God they would get their predictions straight. That is a very reasonable criticism. However, one of Bahau'llahs most important works (The Book of Certitude/Kitab-i-Iqan) touches on this very theme of a failed prophecy.

Among the Prophets was Noah. For nine hundred and fifty years He prayerfully exhorted His people and summoned them to the haven of security and peace. None, however, heeded His call. Each day they inflicted on His blessed person such pain and suffering that no one believed He could survive. How frequently they denied Him, how malevolently they hinted their suspicion against Him! Thus it hath been revealed: And as often as a company of His people passed by Him, they derided Him. To them He said: Though ye scoff at us now, we will scoff at you hereafter even as ye scoff at us. In the end ye shall know.[Qur'an 11:38.] Long afterward, He several times promised victory to His companions and fixed the hour thereof. But when the hour struck, the divine promise was not fulfilled. This caused a few among the small number of His followers to turn away from Him, and to this testify the records of the best-known books. (Kitab-i-Iqan, pg. 7, my emphasis)

Bahau'llah is setting the precedent for the possibility that a prophecy may not come true, not only in the manner that people expect it, but a bonafide unfulfilled prediction.

Test Your Savvy on Religion

Time for a pop quiz.

The New York Times reported recently on a Pew Research Center poll in which religious people turned out to be remarkably uninformed about religion. Almost half of Catholics didnt understand Communion. Most Protestants didnt know that Martin Luther started the Reformation. Almost half of Jews didnt realize Maimonides was Jewish. And atheists were among the best informed about religion.

So let me give everybody another chance. And given the uproar about Islam, Ill focus on extremism and fundamentalism  and, as youll see, theres a larger point to this quiz. Note that some questions have more than one correct choice; answers are at the end.