Friends of Leila Alavi say the 26-year-old hopelessly tried to support her troubled and abusive husband right up until he allegedly murdered her with a pair of scissors.

{josquote}...Mr Hosseiniamraei followed the Baha'i faith and they were married at the Australian House of Worship on Sydney's northern beaches in 2011.{/josquote}

Her body was found in her car on Saturday morning at the Auburn shopping complex where she worked as a hairdresser.

That evening, police arrested and charged her 33-year-old husband Mokhtar Hosseiniamraei with murder. He was refused bail on Sunday and police told a Sydney court he "has made admission to the offence".

[The two murdered women were Bahais.]

Investigators with the Terre Haute Police Department say they have solved a 34-year-old case. A suspect is in custody, but not in Indiana.

Lucinda Farmer and Mary Quillen were found shot dead outside their apartment on the morning of July 5, 1980. Now, more than three decades later police have charged Harry Rowley with their murders.

According to the probable cause affadavit, Rowley did confess to the murders during a conversation last year. The prosecutor's office currently is battling with California to get Rowley back to Indiana for a trial.

{josquote}But there are costs to being a nation in which were all heretics to one another, and no religious orthodoxy commands wide support.{/josquote}

IN American religious history, Nov. 8, 1960, is generally regarded as the date when the presidency ceased to be the exclusive property of Protestants. But for decades afterward, the election of the Catholic John F. Kennedy looked more like a temporary aberration.

Post-J.F.K., many of Americas established churches went into an unexpected decline, struggling to make their message resonate in a more diverse, affluent and sexually permissive America. The country as a whole became more religiously fluid, with more church-switching, more start-up sects, more do-it-yourself forms of faith. Yet a nation that was increasingly nondenominational and postdenominational kept electing Protestants from established denominations to the White House.

The six presidents elected before Kennedys famous breakthrough included two Baptists, an Episcopalian, a Congregationalist, a Presbyterian and a Quaker. The six presidents elected prior to Barack Obamas 2008 victory included two Baptists, two Episcopalians, a Methodist and a Presbyterian. Jimmy Carters and George W. Bushs self-identification as born again added a touch of theological diversity to the mix, as did losing candidates like the Greek Orthodox Michael S. Dukakis. But over all, presidential religious affiliation has been a throwback to the Eisenhower era  or even the McKinley era.

That is, until now. In 2012, we finally have a presidential field whose diversity mirrors the diversity of American Christianity as a whole.

Search for a New "World Order" in the Mediterranean' 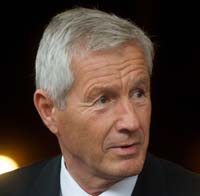 Distinguished participants, Ladies and Gentlemen, I always prepare for my participation at events such as this one. When I was asked to speak at the panel devoted to the search for a New World Order in the Mediterranean, I started by googling the title. This was only partially helpful.

According to Wikipedia, a broadly used yet seldom quoted source of facts, the term New World Order stands for:

{josquote}I would say that the Bahaians got it about right. It should be about equity, justice and respect.{/josquote}

BRITISH ARMY technical officers yesterday defused a bomb left in the garden of one of Derrys best-known doctors.

The device was found by a PSNI patrol at the home of retired GP Dr Keith Munro at Learmount Road near the Co Derry village of Claudy at 2am yesterday.

Five hours later, about 16km away in the townland of Tamnaherin near Eglinton, a bomb exploded outside the unoccupied home of a Catholic police officer.

The explosion at Ervey Road caused blast damage to the front of the officers home but no one was injured in the no-warning blast. The officer joined the PSNI three years ago; his home is beside the grounds of Slaughtmanus GAA club and close to St Marys Church.

A senior police officer in Derry said he had no doubt that both attacks had been carried out by the Real IRA.

Dr Munro, chairman of the Foyle Hospice in Derry, has been a police medical officer for more than 40 years.

In that capacity he carried out medical examinations on suspects in police custody. A prominent member of the Bahai community, he is also the author of a book, Building Bridges.