A Mashriq on every continent?

There are 7½ Bahai temples in the world, all of them with nine doors and circular in shape. They’ll tell you there’s one on each continent, but they don’t have one on Antarctica and I leave you to do the math.
The Bahai Temple

It's a little-known fact that 2007 is the centenary of Sir Ernest Shackelton's attempts to put a House of Worship on the frozen continent. His most famous attempt was made in 1914. Also little-known is the fact that many in that party were British Baha'is, trying to avoid being called up for service in World War I.

The materials for the House of Worship travelled with Shackelton from South Georgia to New Zealand in 1916. There, they sat in storage for many years while Sir Ernest tried to re-vivify the project.

Very few people know that Sir Ernest was a Baha'i, and had taken on the House of Worship project, but many have remarked on the nine-pointed star on his gravestone.

After Sir Ernest's death on South Georgia in 1922 at the start of a site reconnaissance expedition to Antarctica, storage fees for the materials were apparently left unpaid and the materials were finally sold by auction to a South Otago farmer who lived near Taieri Mouth. He constructed a barn, apparently using the original plans. 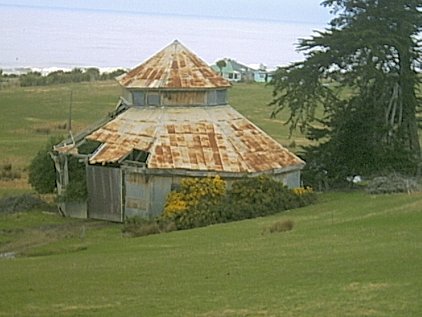 "Should the fire of the love of God be kindled in Greenland, all the ice of that country will be melted, and its cold weather become temperate—that is, if the hearts be touched with the heat of the love of God, that territory will become a divine rose garden and a heavenly paradise, and the souls, even as fruitful trees, will acquire the utmost freshness and beauty. Effort, the utmost effort, is required."
`Abdu'l-Baha. Tablets of the Divine Plan, p.28

Imagine what would happen if this House of Worship was to be shipped to Antarctica!